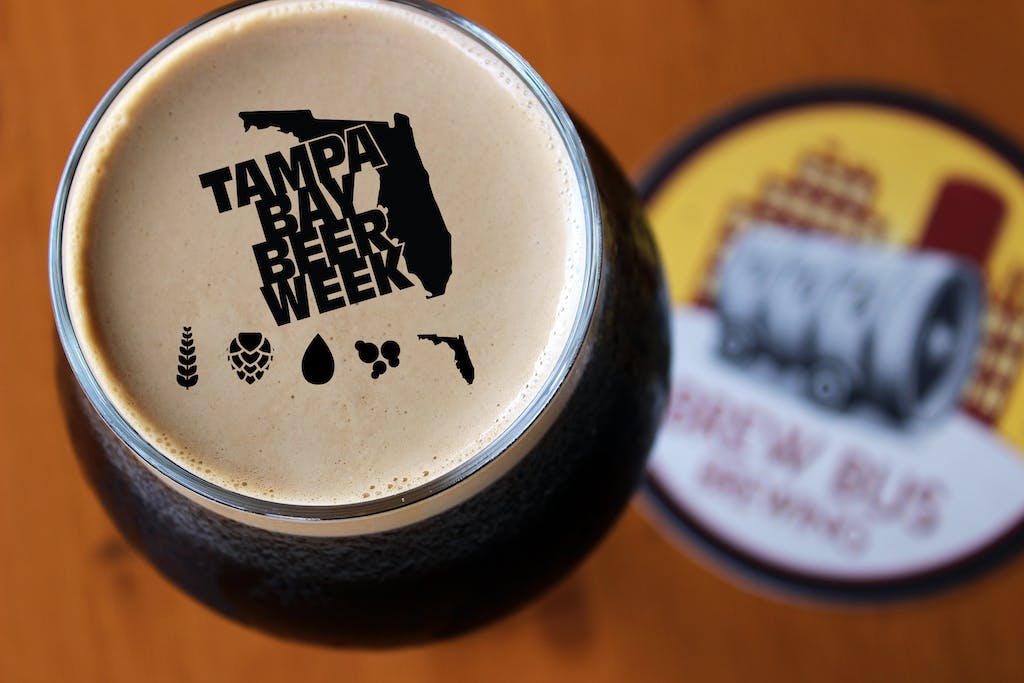 Meet The Artists!
February 22nd 5PM-9PM @ Brew Bus Brewing
Meet the artists behind the chosen labels for the 2018 Official Beer of Tampa Bay Beer Week. Each of these talented artist designed a custom label for Brew Bus Brewing‘s Tangerine Wit, a Belgian Style Witbier brewed with Tangerines for a Florida flare. The cans will be sold in stores as a 4-pack containing all 4 custom label designs.

Label work will be debuted at the event and each artist will have additional work on display. Come check out the amazing local talent, enjoy a cold pint and take home a custom 4-pack of the Official Beer of 2018 Tampa Bay Beer Week.
*This event is free to attend, no tickets necessary.

The Ultimate Brewer 3
March 2nd 7PM-10PM @ Brew Bus Brewing
Tampa Bay Beer Week presents The Ultimate Brewer 3, the official kickoff to TBBW 2018! This brewing challenge tests brewer’s skill, creativity and probably their nerves. Pairs of unusual ingredients were randomly drawn and 25 participating breweries chose the beer style that best demonstrates those ingredients. Garlic, Wasabi, or Hazelnut might test a brewer’s creativity, but combine one of those with pineapple, coriander, or chives and now you have quite the challenge. These ingredients are kept secret and the beers are tasted blind on March 2nd 7-10pm.

The winner will be chosen between a balance of two votes: Consumer Choice as chosen by you, and the Pro Panel chosen by the participating brewers. The brewery with the most votes wins The Ultimate Brewer 2018, will have their name etched on the trophy, and will be presented with the opportunity to brew the official beer of TBBW 2019. The trophy currently resides at Brew Bus Brewing, two-time champion and brewer of this year’s official beer of TBBW 2018. Will they be champions yet again? You decide.

Ticket price includes a commemorative sampling glass, samples of each of the 25 contestants, and a 16oz Brew Bus beer (you know, the kind without the garlic) Get your tickets HERE.

Prepare your defenses for an assault of roasted malt flavors with caramel and dark fruity undertones. Aged in rye whiskey and rum barrels and then, in true communist fashion, blended together to create an army of esters and aromas unparalleled in weaker beers. It may be big and bold, but the beer boasts an arsenal of flavor that won’t leave your palette smoldering in ruins. It’s a beer good enough for the czars, but enjoyable for all.

Double Barrel-aged Scorched Earth Russian Imperial Stout. will be available in 16oz cans, 2-pack/20oz. on March 5th beginning at 4PM. Want to know more about this beer? Our brewers will be bartending this event and will be on hand to chat and answer questions about it. Pull up a seat at the bar and enjoy a couple with us as we raise a glass to Tampa Bay Beer Week.

Beer Trivia: Beat The Brewers
March 6th 7:30PM-9:30PM @ Brew Bus Brewing
Join us for a special night of trivia in honor of Tampa Bay Beer Week. Our friends from Team Trivia will be incorporating questions about local and American craft beer. Our brewers will be playing as a team, see if you have what it takes to beat them. As always we’ll have some awesome prizes including behind the scenes access to our brewery.

Trivia starts at 7:30. The kitchen opens at 4PM for Taco Tuesday.

Brew Bus University: Beer 101
March 7th 7PM-8:30PM
How much do you know about craft beer? What do you want to know? At Brew Bus Brewing we believe that Craft Beer culture is exciting and fun and should not be intimidating nor pretentious. Hence why we are excited to announce the launching of Brew Bus University.

As the craft beer community continues to grow it’s our pleasure, and responsibility, to enlighten as many inquiring minds as we can about it. On Wednesday, March 7th, during Tampa Bay Beer Week we’ll be offering an interactive, fun and educational session to quench your thirst for knowledge about Craft Beer, our brewery and this amazing growing industry.

The session will be held at The Terminal and will include a brewery tour, a commemorative 1-year anniversary Teku glass, beer sampling, certificate of completion and other special surprises.

Be a friend and tell a friend… or drinking buddy… or fellow connoisseur (21+ only) and register soon. Sessions are sure to fill up quickly.

Subscribe to this event for all the delicious updates and purchase tickets at tbbwbeerdinner.eventbrite.com